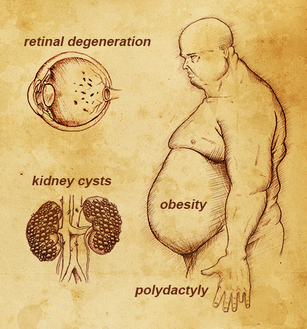 Bardet-Biedl Syndrome is a ciliopathy
First discovered in the early 1960’s, the primary cilium remained an “abortive structure with no function” for four decades. Fast forward to the mid-2000's and the term “signaling antenna” is coined to describe primary cilia. This 180-degree shift in perception was fueled by two major advances: First, ciliary dysfunction was recognized as the culprit in a broad class of disorders characterized by obesity, cystic kidneys, retinal degeneration, skeletal malformations and brain anomalies. These diseases collectively known as ciliopathies are exemplified by Bardet-Biedl Syndrome (BBS). Second, Hedgehog signaling, a major developmental signaling pathway was shown to require cilia for its signal transduction. The cilium is now recognized as a vessel that transforms signaling inputs into processed information for the rest of the cell by dynamically concentrating signaling molecules within a specialized environment.

​Our overarching goal is to understand how cilia establish and alter their composition to meet the demands of the cell.
Removal of activated receptors from cilia 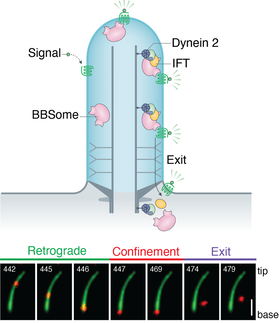 Single molecule imaging of an activated GPCR transported out of the cilium by the BBSome
​A hallmark of ciliary signaling pathways is the dynamic redistribution of signaling molecules in and out of cilia upon pathway engagement. For example, during Hedgehog signaling, the G protein coupled receptor (GPCR) GPR161 moves out of cilia and the GPCR Smoothened accumulates in cilia. The BBSome, a stable complex of eight BBS proteins, assembles a coat on membranes with the small Arf-like GTPase ARL6/BBS3.  Single molecule tracking of signaling receptors has demonstrated that the BBSome/ARL6 coat moves activated GPCRs across the diffusion barrier at the transition zone and out of cilia. How does the transition zone block the passage of most proteins while letting privileged proteins through? Recent structures of the BBSome (obtained by cryoEM in collaboration with Tom Walz) suggest a model where the BBSome alters the confirmation of GPCR to facilitate transition zone crossing.

Targeting a highly specific deubiquitinase to cilia blocks the signal-dependent exit of the GPCR somatostatin receptor 3 (SSTR3)
At any given time, most of the proteins that make up the cilium stay in the cilium while a specific subset becomes selected for removal from cilia. How are select molecules instructed to exit from cilia? We have found that ubiquitin chains with lysine 63 linkages tag activated signaling receptors and trigger removal from cilia. The machineries that add ubiquitin chains onto unwanted proteins in cilia and that recognize ubiquitin chains inside cilia are currently unknown.
Biogenesis and function of cilia-derived extracellular vesicles 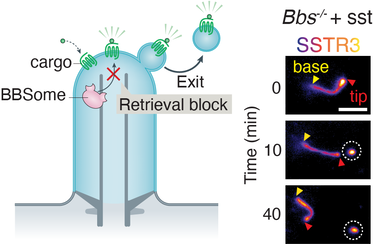 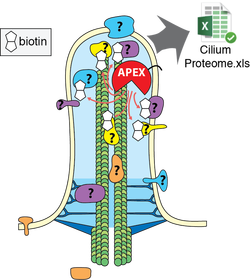 The full extent of signaling events taking place inside cilia remains unknown. Since cilia purification is not readily feasible in mammalian cells, we targeted the proximity biotinylation enzyme APEX to cilia and captured biotinylated proteins. The development of the cilia-APEX technology led to the identification of novel signaling axes inside cilia, such as the AMP-dependent kinase AMPK and the cAMP-regulated kinase PKA.

Recently, the minute-scale temporal resolution of cilia-APEX has enabled a systematic characterization of the changes in the ciliary proteome that take place during the course of Hedgehog signaling. Profiling the alterations of the ciliary proteome under specific conditions is a powerful tool to uncover novel mechanistic insights into ciliary biology, be it in the context of ciliopathies, specific cell types or cilium-dependent signaling pathways. 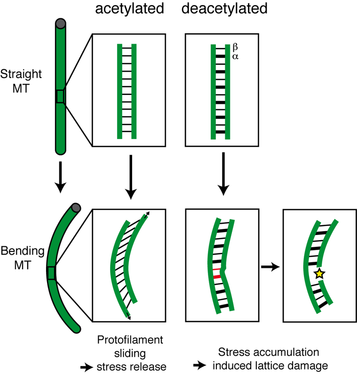 In 2010, we made the serendipitous discovery of the long-sought tubulin acetyltransferase TAT1/MEC-17. Unlike other microtubule-associated proteins or modifying enzymes, TAT1 functions inside the lumen, a far more poorly characterized location than the outer surface of microtubules. What is the impact of a 1-carbon group added to a lysine residue that projects inside the lumen of microtubules? To answer this question, we combined microfabrication and microfludics (collaboration Manuel Théry) with the production of tubulin with defined aceylation levels. This led to the demonstration that acetylation directly alters the mechanical properties of microtubules, making them more flexible and less susceptible to breakage.  We went on to develop FRET-based assays to probe the specific interactions modulated by acetylation and found that lateral contacts between protofilaments are weakened by acetylation. Acetylation thus increases lattice plasticity to make microtubules more resilient. In this sense, long-lived microtubules are better equipped to resist the mechanical stresses they experience during their lifetime because they are acetylated. Alteration of microtubule mechanics by acetylation helps set the correct cell stiffness, a particularly important property for mechanosensory cells.
updated 12/4/20